Item was successfully added to your cart 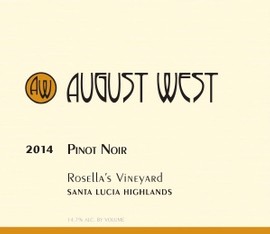 Our final Rosella's Vineyard Pinot Noir is our 2014.  When August West started in 2002, we produced only one wine, and that was Rosella's Pinot.  We've been lucky to have worked with Rosella's for 13 vintages, it's quite a vineyard.

Similar in style to the 2010 Rosella's Pinot, the 2014 will be one that not only drinks well early, it is also a candidate for drinking in the long-term.  We recommend drinking this anytime between 2016 and 2024.